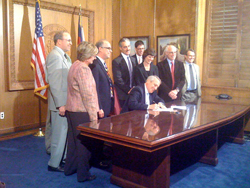 The oil and gas rules review bill was signed by Governor Ritter on April 22.  The bill had passed the General Assembly on March 25.      Congratulations to all who have worked so hard and effectively for a very long time.

The Colorado Oil and Gas Conservation Commission adopted the rules on December 11, 2008.   The Rules are posted on the Commission website.