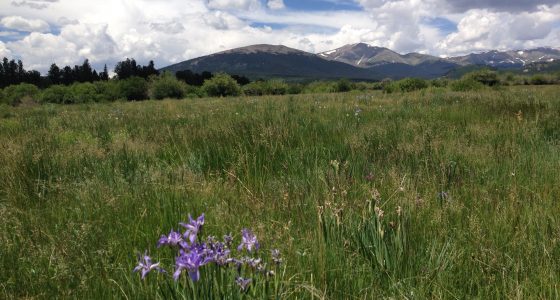 BLM issued its draft Eastern Colorado Resource Management Plan in June. CWF, joined by NWF, submitted our comment letter on September 20.  This draft plan includes public lands it manages in iconic South Park. The South Park preferred alternative largely is consistent with the recommendations developed through hard work since 2015 by CWF, NWF, Park County, water providers, TU, TRCP and other diverse interests.  CWF had applied for special attention to South Park within the eastern Colorado planning area back in 2011. Our objective has been to safeguard wildlife habitats and waters managed by BLM there.  We are gratified that the collaborative effort over these many years has been largely recognized in this draft plan.   The South Park portion of the draft plan illustrates how the local community and an array of interests can work effectively with BLM to ensure impacts to unfragmented vital wildlife habitats and streams, lakes, and reservoirs will be minimized if future oil and gas development occurs.

Here are a few of the comments CWF made to the draft plan on September 20: Generally we are in support of Preferred Alternative D as it pertains to South Park.  We are particularly in support of the the 1,312 feet setbacks from South Park’s South Platte River and waters containing native cutthroat trout, and within 2,641 feet of the iconic Gold Medal streams. We requested particular attention to protect migratory corridors in South Park. We urge that state wildlife areas be closed to future oil and gas leasing. We urge that occupied bighorn sheep habitat be designated either a “Backcountry Conservation Area” or as no surface occupancy for oil and gas.

For information on the draft plan, here is the link. And under this link is another link – this second link is to our comment  letter.  Call or email us if you wish to discuss our comments.